As the largest single US investor in the country of Montenegro, and as a discoverer of an exotic, secluded place that welcomes thousands of tourists on an annual base, Neil Emilfarb is the model investor that every entrepreneur should look up to.  His lesson on investing in property should inspire every businessman to embrace innovations and expand efforts beyond the comfort zone of regular streams of revenue and thrive on rather odd, but lucrative opportunities.

A short introduction: Mr. Neil Emilfarb is a US businessman of Uzbekistan descent, with a respectful background in the dry cleaning business. This initial undertaking was set in Boston, Massachusetts, back in 1986, and with this capital gained Mr. Neil was able to start his own internet providing company back in Uzbekistan, in 2002. This enterprise launched the Stratex Investing Group, which is heavily concentrated on property investments. 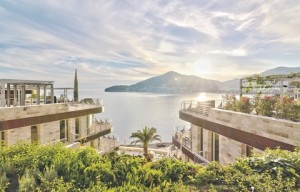 This leads us to the current state of affairs, and the project called The Dukley Gardens. This investment is ingenious on different levels. Mainly, the fact that the property is located on the coast of the Adriatic Sea sounds delightful. On the other hand, the country of Montenegro is a state that gained independence in less than a decade ago. Various sources (which will not be mentioned since this article isn’t politically oriented) suggest that this country isn’t as reliable as one would prefer when considering investing in it.

However, Mr. Neil Emilfarb decided to give a chance to a struggling little coastal country, confided in the local government to support his efforts, and eventually invested $150 million of dollars in this project. The final result is what concerns us, and when we consider that a luxury condo in this complex cost as much as one would in Manhattan, and yet again given the fact that more than 70% of this residential area is already sold out, provides a great insight on how daring and still profitable this venture actually was.

Following this pattern, we should all take a seat and learn something from this immense undertaking of Mr. Neil Emilfarb.

1. Recognizing the opportune moment is the key of success. We have to realize that nothing lasts forever, and that goes for eventual gains and losses equally. One territory, or a subject of question in general, can be endangered at one moment, but in the same manner the turning point is what will bring this chance for profit to ones benefit. Spotting that turning point is the holy grail of investing.

2. Stay diligent and loyal to a system. Analyze, prioritize, take every risk in consideration, prepare for the worst and hope for the best. Mr. Neil confined in the local government of Montenegro exclusively because of the additional insurance for his investment. As it turned out, he needed that insurance, and it provided him with a chance for eventual profit.

3. Nothing happens over night! The process that led to the completion of the Dukley Gardens project has its roots in Boston, 7000 km away, and three decades prior to the actual investment. Even the process of building this community didn’t happen overnight, so prepare for some serious waiting time.

At the very end, be advised that investing in property has always been a sort of a myth in certain circles. This doesn’t mean that something is unachievable, just that it requires an equal amount of work and stress that one would put into any other serious business. Mr. Neil is currently resting in his home, at the Dukley Gardens, but we will certainly follow this businessman to his next ventures as well.

Money is one of those funny things. Lots of people get extremely upset about it. Or disappointed. They feel like they have too much, or not enough, or someone else has more or less, and there is something unfair in the world that won’t balance their financial equation. And then there are the people who […]

What is property development finance?

If you’re seeking flipping or letting opportunities, property development finance could provide you with the freedom you need Undertaking a large building or refurbishment job is no easy feat. It’s a mammoth task that is likely to excite and scare you in equal measure. Of course, any job of such scale requires a huge amount […]

Whether It Is Better To Invest Long or Short

To Invest Or Save? Saving vs. investing – savings means to slowly put money aside into places like banks, whereby investing means to use your money and grow it by investing in products or services that will increase in value. As consumers, we are always told to keep at least three months of living expenses […]

How Businesses Can Become Leaner

5 Investments You Should Never Pinch Pennies On

How Does Finance Affect You?