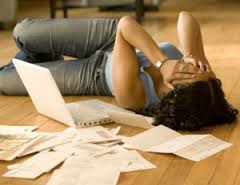 Anyone who finds themselves in long term or sudden debt can feel that they are facing a very difficult period of their lives.

Debt is one of the major causes of stress and arguments in a relationship and often people hide the truth from friends and family because of the fear of shame, embarrassment or confrontation. As much as they may try to ‘mend’ the situation on their own, they often feel a great deal of loneliness when trying to deal with something they are completely out of their depth to solve.

The good news is that there is an answer to every debt problem – however big or small. For many it isn’t an overnight solution and could mean a number ofmonths or years of budgeting, planning and creditor negotiation. The fact is though that it is possible to become debt free with some hard work, good organisation and the willingness to communicate.

The partners and family often know when there is a debt problem which isn’t being aired. Swiftly hidden letters, cards being declined with a joking retort, the sudden stopping of previous nights out with a casual ‘prefer to stay in’ comment. Changes in personality due to the worry, sleepless nights become noticed and the vague non-committal attitude to any conversation about family finances are indications of an underlying issue.

Shouldering debt alone is never a good idea. If it isn’t possible to speak to family or friends, there are organisations such as the Citizens Advice Bureau (CAB) to turn to. They won’t judge or be shocked – they will have heard of similar situations many, many times and just want to advise and help.

It may just be a case of lack of knowledge of how to organise a budget. If this is shown to be the situation, then there are online budget calculators available to give structure to the monthly income and expenditure, or with the help of a CAB advisor. If the budget planning shows that with a few tweaks and perhaps a small loan for a couple of weeks being the answer, then this could be the way to restore the financial even keel of a bank balance. For those who decide to look at payday loans, direct lenders can help with emergency finance to assist applicants who need the funds for a short amount of time.

For those with a larger issue, the CAB can help with areas such as liaising with creditors and setting up payment plans. Once these are in place, it may be easier to talk to loved ones about the situation. Many find that offloading their worries and explaining about the debt is nowhere near as devastating as they imagined. The majority of husbands, wives, parents and friends may be shocked at first, but will then rally round to help with ideas and moral support.

Dealing with debt can be difficult but is never something to bottle up and try to tackle alone. The relief which is felt when the ‘secret’ is revealed is tangible and the realisation that it can be faced together is one which all goes to solving the situation much more quickly than harbouring the problem alone.

The ignition switch controls the vehicle, by taking power from the battery and directing it to all electronic components and accessories of the car. It also transfers power to the starter, when the key is turned in the ignition. If the starter does not receive power from the ignition, the car will not start. When […]

It’s not an exaggeration that planning and paying for a funeral in advance can quite literally save your family thousands of pounds. If you haven’t taken the time to consider whether or not you need life insurance, the costs of a funeral could catch you very much by surprise. These days the average funeral costs […]

Are asset loans an option for securing quick cash?

Asset loans seem to be very popular these days for securing quick short term loans without the red tape process banks require. You should however be aware of how these loans work and what you are getting yourself in for.

Protection in the Workplace and its Importance