There has always been an irresistible allure about gold all over the world. For many years, it was the symbol of wealth and today it remains the ultimate store of value for many savers worldwide, especially at a time of uncertainty among individual currencies. It was only last year when the future of gold looked very bleak. Its prices had trended lower, just like other commodities such as oil, and analysts were quick to declare that gold would soon trade at $950 which was almost at production costs. This, of course, never happened and prices have been surging higher and higher since late last year. In fact, for the first time since 2012, gold ended last year with its prices higher than the opening prices. To top it off, it is barely two months into 2016 but this precious yellow commodity has already posted a 20% rise in price value. 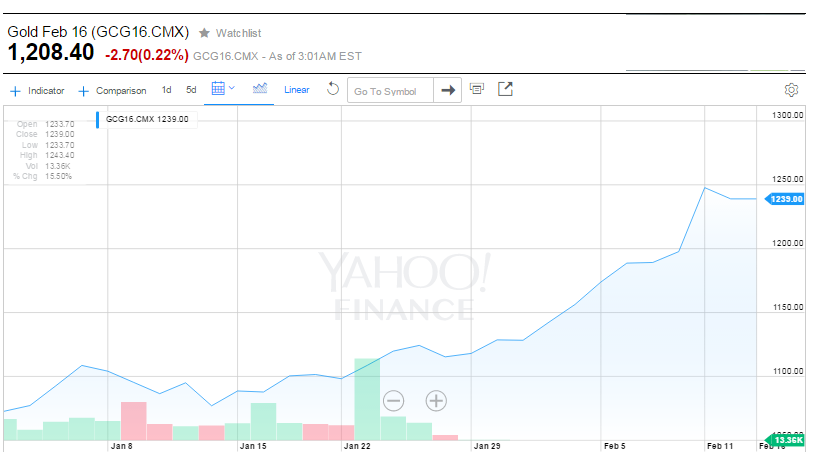 But are we out of the woods yet? Not really, but the fundamentals seems to suggest that there are exciting times for gold savers and traders ahead. Let us take a look at why.

Gold has always enjoyed a safe haven status. Investors flock to it when there is uncertainty in traditional markets such as equities or bonds. In such markets, investments are valued in currency form so when there is fiscal uncertainty, especially involving major currencies such as the U.S. dollar (USD), the value of gold always tends to rise. In recent months, fiscal uncertainty has become the norm around the world and the Eurozone continues to be the source of the most uncertainty in the market. The European Central Bank (ECB) is continuing with the implementation of its quantitative easing programs but its chair, Mario Draghi, occasionally surprises the markets with conflicting statements. Additionally, the bank’s policies, particularly regarding bailouts and bondholders towards peripheral European nations, have been questionable at best.

The U.S. Federal Reserve is also another culprit. Only late last year, the bank hiked interest rates for the first time in the country in seven years. However, on her first address this year, when the market expected to get a clear picture of the country’s monetary direction, the Fed’s chair Janet Yellen elected to be vague in her statements by saying that the Fed will continue to hike interest rates gradually. By “gradually”, we can only guess what might happen – as a result, we know absolutely nothing! 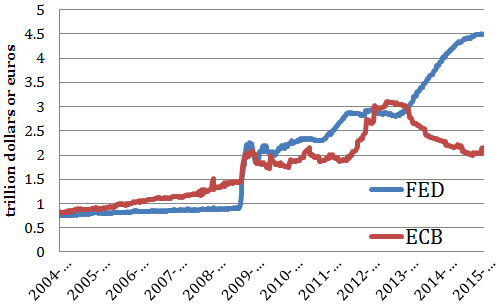 Meanwhile, the Bank of Japan (BOJ) is also an interesting player. Governor Kuroda has applied almost all that is possible to deliberately weaken the value of the Japanese yen (JPY). Yet, it seems that the market has a different view – the yen’s rally in the past few weeks has been second only to gold. With the BOJ proving in recent years to be the most political central bank and not afraid to make a move, investors can only wait and see.

All this uncertainty around the world can only add fuel to the gold fire that has just started.

The latest report from the World Gold Council (WGC) was very bullish on the future prospects of gold. It documented how China, Russia and India will be boosting their stocks of physical gold significantly starting this year going forward. While these three countries remain the biggest market for physical gold, China was particularly a curious observation.

Already the single largest consumer of gold, the country posted a 25% rise in demand for gold bars and coins in the 4th quarter of 2015 compared to a year earlier. This year, demand is already 21% higher with currency weakness cited as the main catalyst. Additionally, the WGC report also noted that the shrinking global equity markets will serve as the main driver of demand for physical gold this year. As everyone seeks to stock more and more gold, we can expect prices to continue edging higher and higher. 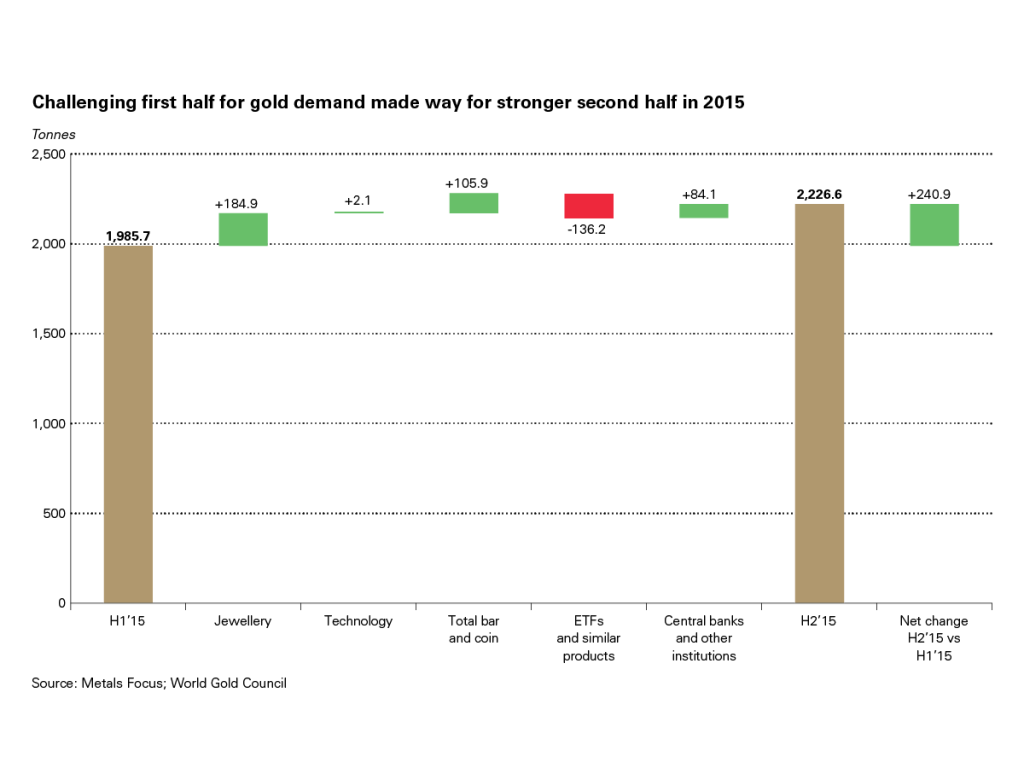 Gold has always had solid and distinct multi-year trends, which has always intertwined with the global economy. To date, we have seen three major phases of gold price cycles. The first was the 1980 -2000 bear run which saw gold prices tumble from $850 to $250. The second phase was the 2001 – 2011 bullish cycle where gold prices rose from $250 to over $1,900. The third is the 2011 – 2015 correctional phase where the incredible 2001 – 2011 bullish move was corrected by almost 50%. In a bullish market, such a correction is very normal. However, since late last year, gold prices have been surging higher and higher and it is very likely that this precious commodity’s long term bullish run has just resumed. 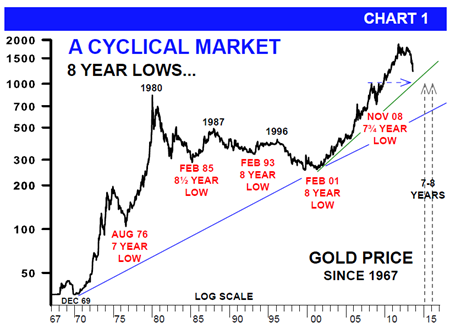 It is however not all cheer for this shiny metal. The WGC report cited currency weakness as a major factor driving gold demand, but on that front, the commodity faces one major hurdle: the US dollar.  The greenback is continuing to post gains against almost all major currencies except the yen. For years, gold has had an inverse relationship with the US dollar and the greenback’s strength could slow down the commodity’s price rally. But with inconsistencies from the Fed and the underperforming equity and bond markets in the US, this might simply be a minor obstruction.

Gold has always been a great source of capital appreciation. Most investors view the commodity as a great hedge against inflation as well as other economic pressures facing our world today. When thinking about investing in gold, most people envision buying physical gold in the form of gold bars and gold coins. This is a great way of investing but it would also require deep pockets. 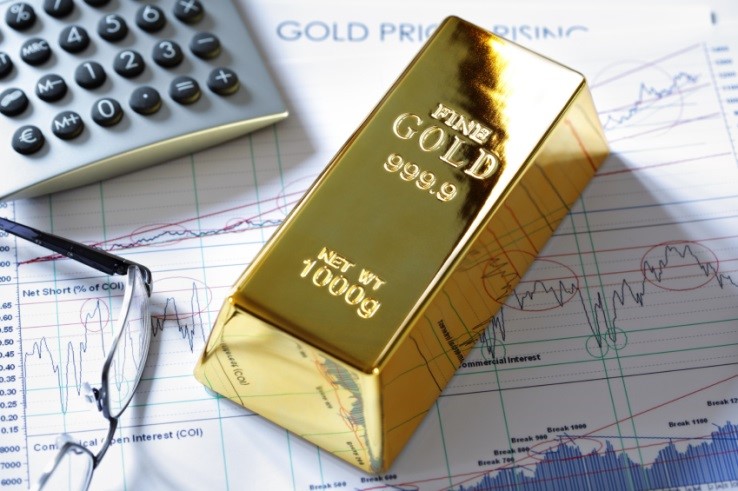 Investors can also trade in gold by investing either in companies inherently dealing with gold (through mining, processing or trading) or ETFs using gold bullion as their basis. Despite all these lucrative options, the cheapest and most efficient way to join the gold party is by trading its spot price through the forex and binary options markets. Particularly, binary options trading offers investors a simple yet effective way of profiting from the current bullish cycle of gold. The spot price of the commodity changes by the minute and investors can track these changes 24/7 in the binary options market and also get the chance to return high profits within a relatively very short period of time compared to investing in physical gold. Investors can also keep track of market news that might affect the spot price of gold here with a leading binary options broker and then adjust their investment strategies according.

Gold looks like it has recovered its mojo and as investors, we should be awake and bask in its shine.

Investing in the Middle East: why this sector is growing

Key to successful investment is the ability to predict the future. This is important when dealing with volatile investment markets like NAB Bitcoin where the slightest good news can significantly jump the value of the commodity. However prediciting the markets isn’t always easy, often it can never be achieved with complete accuracy. Therefore the most […]

As the largest single US investor in the country of Montenegro, and as a discoverer of an exotic, secluded place that welcomes thousands of tourists on an annual base, Neil Emilfarb is the model investor that every entrepreneur should look up to.  His lesson on investing in property should inspire every businessman to embrace innovations […]

Money is one of those funny things. Lots of people get extremely upset about it. Or disappointed. They feel like they have too much, or not enough, or someone else has more or less, and there is something unfair in the world that won’t balance their financial equation. And then there are the people who […]

How to Repay your Loan before your 30’s

The golden rules of buying property at auction